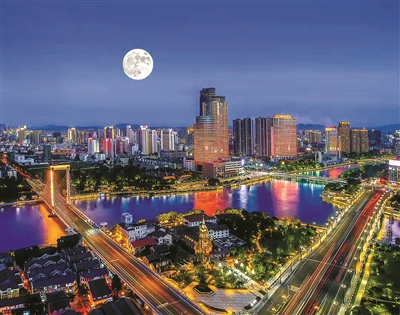 At Mid-Autumn Festival, the moon is at its roundest and brightest. [Photo by Wang Liliang］

As one of the most important traditional Chinese festivals, the Mid-Autumn Festival falls on the 15^th day of the eighth month of the Chinese lunar calendar, or Sep. 10 of the Gregorian calendar, this year.

Here are the things you should know about this special occasion, perhaps they could be a guide to what you can do on this day.

What are the festival's origins? Over the centuries, there have been different versions of the folklore behind it. Among them, the story of Chang'e is the most widely known.

Chang'e is the Chinese goddess of the moon who consumed an elixir of life before flying to the moon.

According to the most famous variation of the story in Chinese mythology, in ancient times, 10 suns shined simultaneously in the sky, creating scorching heat on earth: plants were burnt and humans faced death.

Hou Yi, Chang'e's husband and a valiant archer, was able to shoot down nine suns and saved the planet. As a reward, he was given an elixir of immortality, but it was only enough for one person.

The archer didn't take the elixir since he didn't want to be separated from his beloved wife, but instead, he asked her to put it away.

After his epic deeds, Hou Yi gained instant fame and respect nationwide and a large number of people flocked to his home to learn his archery skills.

However, an immoral man named Peng Meng was in the throng of people but only wanted the elixir.

One day when Hou Yi was leading his students outdoors to hunt, the cunning Peng said he was sick and stayed behind. He sneaked into the couple's room to steal the elixir, but Chang'e caught him.

Peng tried to force Chang'e to hand over the elixir, but she swallowed it and started to float up to the sky, all the way to the moon.

Legend has it that she chose to stay on the moon, the closest planet to the earth so that she could stay nearer to her husband.

Hou Yi was heartbroken by her departure. He immediately set up an incense table in his garden and laid out Chang'e favourite foods to pay tribute to her. From then on, people began to worship the moon.

The Mid-Autumn Festival takes its name from the fact that it is always celebrated in the middle of the autumn season. The day is also known as the Moon Festival, as at that time of the year the moon is at its roundest and brightest.

This day is also considered a harvest festival since fruit, vegetables and grain have been harvested by this time.

It is an evening celebration where families gather together to light lanterns, eat moon cakes and appreciate the round moon. The full moon is a symbol of family reunion, which is why that day is also known as the Festival of reunion.

In the very beginning, moon cakes were served as a sacrifice to the Moon. The word "moon cake" first appeared in the Southern Song Dynasty (1127-1279). Nowadays, moon cakes are given as presents to loved ones and it represents people's wishes to be together during the Mid-Autumn Festival.

The Chinese government listed the festival as an intangible cultural heritage in 2006. It was made a public holiday in 2008.

People across China will enjoy a three-day holiday to reunite with their families.

When was the last time that you paid attention to the moon? In cities such as Ningbo, high-rise buildings and skyscrapers often hide it from view and city lights dim the moonlight to background illumination.

Apart from that, you can taste mooncakes with local flavour in Ningbo.

It is learnt that different parts of China have widely varying diets and therefore countless mooncake flavours. Traditional fillings include nuts and seeds, salted egg yolk, jujube paste, and bean paste. While this year in Ningbo, there are new flavours such as the "red beauty", a species of orange known grown in Xiangshan county.

Also, modern flavours such as ice cream can be found in Ningbo. At a Haagen-Dazs store, the mooncakes are crispy ice-cream sandwiches with flavours including vanilla, toffee, and berry. "They are popular with young consumers," the shop staff said.